Psalm 127:3-4 says this: “Behold, children are a heritage from the LORD, the fruit of the womb is a reward. 4 Like arrows in the hand of a warrior, so are the children of one’s youth.”

This past Saturday, June 13, 2015, the first Dohm arrow was launched into the world for King Jesus. Here is a pic, taken just a few minutes before we entered the sanctuary. 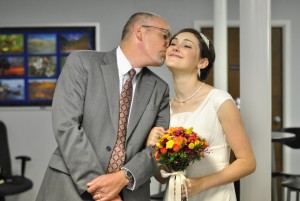 Scott Brown, who officiated Janet and my wedding almost twenty-four years ago, did the same for Anna and Tyler on Saturday. Here are the four points from the wedding sermon, which Scott addressed to the couple:

“Let us be glad and rejoice and give Him glory, for the marriage of the Lamb has come, and
His wife has made herself ready.” 8 And to her it was granted to be arrayed in fine linen, clean and bright, for the fine linen is the righteous acts of the saints. 9 Then he said to me, “Write: ‘Blessed are those who are called to the marriage supper of the Lamb!'” And he said to me, “These are the true sayings of God.”

What a delight to have launched Tyler and Anna out into the world to serve their King more fruitfully together than they even did apart.

It is hard to find a Scripture text that is the equal of Psalm 128 in terms of describing a happy home and what it takes to have one. It was an honor to have drawn the assignment to speak on this topic during a recent NCFIC “Master’s Plan for Fatherhood” conference in New York City.

My favorite line: “The secret is there is no secret. There is only God. God is the key.”

Happy listening, if you dare!

Scott and Dan are both in Harrisburg, PA for the “History of America” conference. Scott sent this from a message that was given by Paul Jehle last night:

“The pilgrim church was a holy commonwealth. They trained their children by voice obedience in a soft voice on the first command. Parents were put in stocks if a child disobeyed in public.”

Wow – voice obedience, soft voice, first command. However near or far from it we are, THAT IS THE TARGET. We need to be nearer and nearer and nearer to this target. When we can give instructions in a soft voice that are followed immediately the first time, it is likely that we have secured what Paul calls “in submission with all reverence” (1 Timothy 3:4). It is every child’s duty before God to honor his or her parents, and it is the duty of every godly parent to work diligently to secure that honor. That is part of what it means to “bring them up in the training and admonition of the Lord” (Ephesians 6:4).

So if we have in any way succumbed to thinking that the dutiful parents are the ones who are loudly and angrily correcting and commanding their children, we need to retrain our brains to think more biblically. Often the parents who are parenting most closely to the counsel of the word of God aren’t noticed at all, because they are able to direct their children once with a soft voice. The hard work of parenting – and hopefully of discipleship – has been done at home, and the wise and judicious use of the rod is yielding good fruit in public settings. This amazes worldlings when they see it, by the way.

May we be so thorough in parenting according to the Bible that our normal pattern is voice obedience, soft voices, and one-time commands, and the rare exception is public disobedience that requires a raised voice and retiring to a place of privacy where sterner discipline can be administered.

Now that is a target fully worth aiming at!